The start of the new school year, the lifting of some indoor restrictions, returning holidaymakers plus cooler weather are raising concerns that a second wave of Covid-19 infections is on the way. Source: EUObserver

Countries in eastern and central Europe are reacting differently to the spike in infections, as the region moves into winter.

Some countries have reimposed restrictions, and even closed borders to foreigners – others are reluctant to do so just yet.

The south-eastern European country last week hit a record 1,713 new Covid-19 cases in a 24-hour span. That is the highest number recorded since the start of the pandemic, as the testing rate remained constant over the past two months.

According to European Centre for Disease Prevention and Control (ECDC), Romania scores the highest Covid-19 death rate in the European Union, 2.8 per 100,000 citizens.

The best performing EU member states are Germany, Denmark, Cyprus, Finland and Latvia with a rate of 0.1 per 100,000 citizens.

“The situation is stable, we have daily increases but we believe we are plateauing for now. New activities such as the start of the new school year, the opening of indoor restaurants, the electoral campaign and voting day might bring a rise in the number of Covid-19 infections. 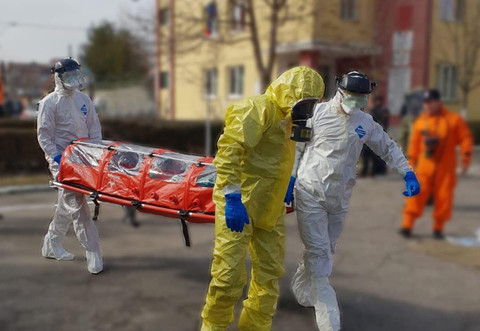 It all depends on how well Romanians will respect health measures, such as compulsory masks, maintaining social distance and enhanced hygiene protocols”, Andrei Baciu, state secretary in Romanian ministry of health told EUobserver.

Romania has been lifting restrictions on indoor restaurants and also increasing the number of participants at indoor and outdoor private events to 50 and 100 people, respectively.

The country is also in the middle of a local electoral campaign with elections due this Sunday.

Răzvan Cherecheș, a public health specialist, warns that there will be an increase in the number of cases following local elections and some lockdown measures might be reinstated. He believes that authorities took some populist measures to keep support.

“After we saw an increase in the number of cases we decided not to take any other such measures. We don’t plan either to impose any lockdown measures following elections”, he told EUobserver.

The Romanian health minister, Nelu Tătaru, has stated that Romania is still facing the first wave of the pandemic – and if the rules are followed, the number of cases may decrease in the second half of October or in November.

South of the Romanian border, Bulgaria has also been seeing a higher number of Covid-19 cases than it did earlier this year. Deaths caused by Covid-19 have been declining, after they peaked in early September, but are still above spring levels.

Kaloyan Staykov, a healthcare economist with the Bulgarian Institute for Market Economics, told EUobserver that no one can predict when a second wave of Covid-19 will hit and what economic impact that might have.

If a second wave and lockdown coincides with the seasonal flu, the impact might be significantly greater.

On 1 September, Hungary decided to close its borders to foreigners, exempting people arriving from Poland, the Czech Republic and Slovakia.

Hungary registered a record 1,017 cases over a single day. Over the summer, new infections in Hungary had mostly stayed lower than 50 a day, but the country has since seen rapidly rising daily infection rates.

The border closing irked Brussels, with some regarding it at odds with Hungary’s Schengen-zone commitments.

Slovakia and the Czech Republic are also trying to fight off what looks increasingly like a second wave of infections, after a relatively quiet summer.

The Czech Republic jumped from a daily tally of around 400 during the summer, to 3,123 new daily infections on 17 September. Masks became mandatory once again in enclosed spaces, and restaurants and terraces must close at midnight.

All over the region, as people meet indoors over the autumn and winter, we can continue to expect a rise in infections. The cold weather might bring extra challenges, as the coronavirus and flu could circulate at the same time.